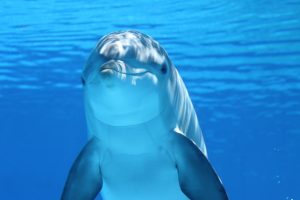 Dolphins are among the most intelligent creatures on earth, showing behaviors such as teaching, learning, cooperation, delayed gratification, and other markers of high intelligence. Dolphins communicate vocally with one another, although we aren’t sure exactly what they communicate. While this communication isn’t “language” as humans define it, it uses echolocation — finding objects and orienteering on the basis of reflected sound — which humans don’t use in their communications.

Now, we have new information about dolphin echolocation thanks to an article recently published in the Journal of the Acoustical Society of America by mathematicians and biomedical engineers in Sweden.  On the basis of earlier research finding that dolphin echolocation signals consist of two tones, rather than one, the new study finds that these two tones are emitted at slightly different times and that the sound waves have a Gaussian shape, similar to a bell curve. Using a mathematical algorithm, the authors successfully simulated echolocation signals in the lab.

The findings explain how dolphins use echolocation effectively but could also contribute to more accurate sound-based diagnostic techniques — particularly ultrasound, which relies heavily on methods similar to echolocation to provide images of moving tissues within the body, e.g., prenatal imaging and heart contraction.

Drugs and devices require extensive testing before they are approved by regulatory agencies and used to treat human patients. Tissue engineering has helped bridge the gap between a promising idea and its use in a patient by creating technologies that mimic the complex structure of human tissue. Most of these technologies focus on the engineering of healthy tissues and much less on constructing models of diseased tissue. These models of diseased tissue may be useful for designing treatments for diseases and understanding how diseases are caused.

In this light, Marsha W. Rolle, PhD, Associate Professor of Biomedical Engineering at Worcester Polytechnic Institute (WPI), is working to create engineered blood vessels that are already diseased as a way to test possible treatments. With three years of funding from the National Institutes of Health’s National Heart Lung and Blood Institute amounting to nearly $500,000, Dr. Rolle and her research team create these damaged vessels by engineering smooth muscle cells to form tubes 2 mm in diameter. These synthetic vessels are then modified to resemble features of diseases. For example, growth factors attached to microspheres can encourage the growth of tissue in small parts of the vessel wall, eventually becoming areas of narrowing in the vessel. Similarly, other factors could lead to changes in the vessel that resemble aneurysms. In both cases, the function of the microengineered vessel could be measured as the change happens, providing insight into either vascular stenosis or aneurysms, neither of which is possible in humans.

Dr. Rolle’s first step will be to test the damaged engineered vessels with existing medications. If successful, this new technique could be used for testing of new drugs and devices prior to testing in animals.

Speaking of damage to the circulatory system, a new article in Nature Biomedical Engineering details how engineers at MIT, Harvard, and Trinity College, Dublin, created a heart implant that can deliver targeted therapy to damaged heart tissue. The authors, led in part by Conor J. Walsh, PhD, and David J. Mooney, PhD, of Harvard, created a device called Therepi, approximately 4 mm in size, which is deployed with a hypodermic. Once placed, a reservoir of medicine within the Therepi treats the damaged heart muscle. In addition, it can be refilled without needing to remove the implant. The Nature Biomedical Engineering study is limited to testing in rats, but the authors see testing in humans in the near future.

Danielle S. Bassett, PhD, Eduardo D. Glandt Faculty Fellow and Associate Professor of Bioengineering at the University of Pennsylvania, has been named the 2018 recipient of the Erdős-Rényi Prize in Network Science by the Network Science Society (NetSci). NetSci has recognized Dr. Bassett for “fundamental contributions to our understanding of the network architecture of the human brain, its evolution over learning and development, and its alteration in neurological disease.” Dr. Bassett will receive the award and deliver a lecture on June 14 at the International Conference on Network Science in Paris. She is the seventh scientist and fourth American to receive the prize.

The Erdős-Rényi Prize is awarded annually to a scientist younger than 40 years old for his/her achievements in the field of network science. It is named for the Hungarian mathematicians Paul Erdős, whose surname provided a measurement for research collaboration by academic mathematicians, and Alfréd Rényi, whose work focused on probability and graph theory. In network science, an Erdős-Rényi model is a model for generating random graphs. Dr. Bassett’s research applies the principles of network science in neuroscience, with the intention of understanding the brain better by modeling the networks and circuits of our most complex organ.