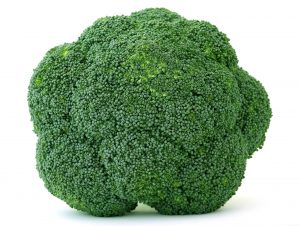 George H.W. Bush refused to eat it, but maybe he should start. It turns out that broccoli, combined with bioengineered yogurt, could provide effect cancer prevention. We’ve known for some time that compounds in certain fresh vegetables can increase chemoprevention, but the levels are usually too low to be effective, or they can’t be assimilated optimally by the body.  However, scientists in Singapore found that engineered bacteria, when ingested by mice with colorectal cancer, had anticancer effects. The bacteria caused the secretion of an enzyme by the cancer cells that transformed glucosinolates — compounds found in vegetables — into molecules with anticancer efficacy. The scientists report their findings in Nature Biomedical Engineering.

The authors programmed an E. coli cell line to bind to heparan sulfate proteoglycan, a cell surface protein that occurs in colorectal cancer cells. Once the engineered bacteria bound to the cancer cells, the bacteria secreted myrosinase, an enzyme that commonly occurs in many plants to defend them against aphids. In the cell model employed by the authors, myrosinase caused the conversion of glucosinolates into sulforaphane, which in turn could inhibit cancer cell growth.

The scientists then applied their system in a mouse model of colorectal cancer, feeding the mice yogurt infused with the engineered bacteria. They found that the mice fed broccoli plus the yogurt developed fewer and smaller tumors than mice fed broccoli alone. Additional testing is necessary, of course, but the study authors believe that their engineered bacteria could be used both as a preventive tool in high-risk patients and as a supplement for cancer patients after surgery to remove their tumors.

The Gates of CRISPR

About two years ago, software giant Microsoft unveiled Azimuth, a gene-editing tool for CRISPR/Casa9 that it had developed in collaboration with scientists at the Broad Institute. Now, in response to concerns that CRIPR may edit more of the genome than a bioengineer wants, the team has introduced a tool called Elevation. A new article in Nature Biomedical Engineering discusses the new tool.

In the article, the team, co-led by John C. Doench, Ph.D., Institute Scientist at the Broad Institute, describes how it developed Azimuth and Elevation, both of which are machine learning models, and deployed the tools to compare their ability to predict off-target editing with the ability of other approaches. The Elevation model outperformed the other methods. In addition, the team has implemented a cloud-based service for end-to-end RNA design, which should alleviate some of the time and resource handicaps that scientists face in using CRISPR.

Reducing Infant Mortality With an App

Among the challenges still faced in the developing world with regard to health care is high infant mortality, with the most common cause being perinatal asphyxia, or lack of oxygen reaching the infant during delivery. In response, Nigerian graduate student Charles C. Onu, a Master’s student in the computer science lab of Doina Precup, Ph.D., at McGill University in Montreal, founded a company called Ubenwa, an Igbo word that means “baby’s cry.”

With Ubenwa and scientists from McGill, Onu developed a smartphone app and a wearable that apply machine learning to instantly diagnose birth asphyxia based on the sound of a baby’s cry. In initial testing, the device performed well, with sensitivity of more than 86% and specificity of more than 89%. You can read more about the development and testing of Ubenwa at Arxiv.

Several universities have announced that they are introducing new centers for research in bioengineering. Purdue University secured $27 million in funding from Semiconductor Research Corp. for its Center for Brain-inspired Computing Enabling Autonomous Intelligence, or C-BRIC, which opened last month. The center will develop, among other technologies, robotics that can operate without human intervention.

In Atlanta, Emory University received a $400 million pledge from the Robert W. Woodruff Foundation for two new centers — the Winship Cancer Institute Tower and a new Health Sciences Research Building. The latter will host five research teams, including one specializing in biomedical engineering. Further north in Richmond, Virginia Commonwealth University announced that it will begin construction on a new $92 million Engineering Research Building in the fall.  The uppermost floors of the new building will include labs for the college’s Department of Biomedical Engineering.

Finally, North Carolina’s Elon College will introduce a bachelor’s degree program in engineering in the fall. The program will offer concentrations in biomedical engineering and computer engineering. Sirena Hargrove-Leak, Ph.D., is director of the program.