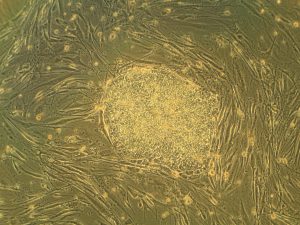 Heart attacks are the result of a stoppage of blood flow to the heart – an interruption to normal function that can result in severe tissue damage, or even tissue death. This loss of healthy tissue function is one of the biggest challenges in treating patients that undergo heart attacks, as the damaged tissue increases their risk of having future attacks. One of the main solutions to this issue right now is the creation of cardiac tissue scaffolds using stem cells to create a platform for new and healthy tissue to grow in vivo. A group of biomedical engineers at Michigan Technological University hopes to expand on this basis by focusing not just on cellular alignment in the scaffold but on that of microvessels too. Led by Feng Zhao, Ph.D., Associate Professor of Biomedical Engineering, the team hopes that this new attention on microvessel organization will improve the vasculature of the scaffolds, and thus improve the success of the scaffolds in vivo, allowing for a better recovery from heart attacks.

Some Stem Cells May Be More Fit Than Others

Stem cells are one of the hottest research areas in the field of bioengineering today. Widely known as the cells in the human embryo that have the ability to eventually transform into specific cells for the brain, lung, and every other organ, stem cells are also of recent interest because researchers found ways to reverse this process, transforming organ-specific cells back to the pluripotent stem cell level. This achievement however, is mostly applicable to individual stem cells, and doesn’t fully encapsulate the way this process might work on a larger population level. So Peter Zandstra, Ph. D., a bioengineering faculty member at the University of British Columbia, decided to research just that.

Using mouse embryonic fibroblasts (MEFs), Zandstra and his lab attempted to track the cells throughout their reprogramming, to more clearly trace each back to its respective parent population. Surprisingly, they found that after only one week of reprogramming, nearly 80% of the original cell population had been removed, meaning that most of the parent generation was not “fit” enough to undergo the process of reprogramming, indicating that perhaps some stem cells will have a better chance of survival in this process than others. This research may suggest that not all cells have the capacity to undergo reprogramming, as many researchers originally thought.

The difficulty in breathing associated with asthma is the result of bronchial spasms, which are a kind of muscle contraction in the airways. But little was known about just how these spasms occurred in patients, so Andre Levchenko, Ph.D., Professor of Biomedical Engineering at Johns Hopkins, and his lab created a microdevice to model them. Calling the device a “bronchi on a chip,” Levchenko and his team used a microphysiological model to look at some of the biochemical and mechanical signals associated with these kinds of muscle contractions. They found that the contractions operate in a positive feedback system, so that those caused by disturbance from allergens will subsequently cause even more contractions to occur. But surprisingly, they also found that a second contraction, if triggered at the right time during the initial contraction, could actually stop the process and allow the muscles to relax. Because asthma is a notoriously difficult disease to translate from animal to human models, this new device opens the door to understanding different mechanisms of asthma before taking research to clinical trials.

A new bioengineering lab at the Children’s Hospital of Philadelphia called the Center for Pediatric Airway Disorders will specialize in a variety of airway procedures for pediatric patients such as tracheal reconstruction and recurrent laryngeal nerve reinnervation. This new lab will be one of the first to give a unique focus to the application of bioengineering to pediatric laryngology. The interdisciplinary center brings together students and researchers from all different fields, including materials science and microbiology, to find new ways of repairing tissue and regenerating organs related to respiratory disorders. Specific areas of research will involve the modeling of children’s vocal cords, understanding the mechanisms of fibrosis, and improving surgical procedures.

Though sickle cell anemia is a common and well-known disease, a new study of its causes at the nanoscale level might reveal previously unknown information about the assembly of hemoglobin fibers. Using microscopes with the ability to visualize these molecules at such a small level, researchers at the University of Minnesota found that the beginning organizations that lead to sickle cell anemia are much less ordered than originally thought. Led by Associate Professor of Biomedical Engineering David Wood, Ph.D., the team of researchers used this higher level of microscopy to find that hemoglobin self-assembly process, which was originally thought to be 96% efficient, is actually only 4% efficient. Wood hopes that this new knowledge will help allow for the development of new and better treatments for patients with sickle cell anemia, as there are currently only two FDA-approved ones on the market.

Penn Today asked five Penn researchers about the women in STEM who have been a source of inspiration and encouragement throughout their own careers. Their responses include active researchers who have paved the way for better inclusion in STEM and famous female scientists from the past who broke boundaries as they made strides with their research.

Dr. Danielle Bassett, the Eduardo D. Glandt Faculty Fellow and associate professor of bioengineering and electrical and systems engineering in the School of Engineering and Applied Science, has two heroes: “Ingrid Daubechies for her work on wavelets, or “little waves,” which are beautiful mathematical objects that can be used to extract hidden structure in complex data. “Also, Maryam Mirzakhani for inspiring a child to believe that mathematics is simply painting. Would that we all could see the world just that bit differently.”

This week, we want to congratulate Joel Boerckel, Ph.D., Assistant Professor of Orthopaedic Surgery and Bioengineering, and his lab on receiving a second R01 Grant from the National Institute of Arthritis and and Musculoskeletal Skin Diseases for their work on defining the roles of YAP and TAZ in embryonic bone morphogenesis and mechanoregulation of fracture repair. Dr. Boerckel is a member of the McKay Orthopaedic Research Laboratory.

We would also like to congratulate Christopher Yip, Ph. D., on being appointed as the new dean of the University of Toronto’s Faculty of Applied Science and Engineering. A professor in both the Department of Chemical Engineering and Applied Chemistry the Institute of Biomaterials and Biomedical Engineering, Dr. Yip’s research involves the use of molecular imaging to understand the self-assembly of proteins.