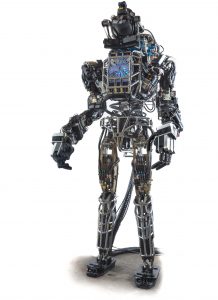 Cerebral palsy (CP) remains one of the most common congenital birth defects, affecting 500,000 American newborns per year. Gait disorders from CP are common, and crouch gait — characterized by misdirection and improper bending of the feet, causing excessive knee bending and the appearance of crouching — is among the most difficult to correct.
Researchers at Northern Arizona University recently developed a new exoskeleton to treat crouch gait. In an article published in Science Translational Medicine, Zach Lerner, Ph.D., assistant professor of mechanical engineering and a faculty member with NAU’s Center for Bioengineering Innovation, tested a robotic, motorized exoskeleton in seven patients with crouch gait. Six of the seven participants using the exoskeleton show improvements on par with surgical procedures to correct crouch gait. Although commercial availability of the exoskeleton will require testing in much larger patient groups, the device is an encouraging development in the treatment of a difficult disorder.

A couple of weeks ago, we discussed here how the Department of Defense supports research using electrical stimulation of the scalp to direct brain activity. At the University of Texas at Arlington (UTA), bioengineering professor Hanli Liu, Ph.D., received a NIH grant to test how infrared light, rather than electrical stimulation, can achieve similar effects on the brain. In collaboration with two other UTA professors, Professor Liu uses Transcranial Infrafred Brain Stimulation (TIBS) to project infrared light onto the forehead to enhance blood flow and oxygen supply to the underlying area of the brain. With the grant, she and her colleagues intend to develop imaging tools that will provide greater insight into how both TIBS and the brain itself work.
Even as we learn more about the brain, the devastating effects of neurodegenerative diseases show us how much we still don’t know. Certain drugs can slow the inevitable advance of the disease, but beginning treatment early is important to maintaining a sense of normalcy. At Case Western Reserve University, Anant Madabhushi, Ph.D., professor of biomedical engineering, is developing computer technology to distinguish Alzheimer’s from other disorders and to predict onset earlier and more accurately.  Reporting their outcomes in Scientific Reports from testing in nearly 150 patients, Dr. Madabhushi and his colleagues used a variety of clinical measures (blood biomarkers, imaging data, neuropsychological testing) instead of a single test and developed a much more accurate test for detecting Alzheimer’s disease. Their approach, called cascaded multiview canonical correlation (CaMCCo), used the ordered analysis of different tests to stratify different patient groups at each stage, rather than developing a single combined measure all at once. More work will be needed to determine how this approach can lead to earlier detection of Alzheimer’s, but its accuracy is very encouraging for future studies.

Rose-Hulman Institute of Technology has announced that Kay C. Dee, Ph.D., is among the recipients of this year’s Inspiring Leaders in STEM Award from Insight Into Diversity magazine.  Professor Dee, Associate Dean of Learning and Technology and Professor of Biology and Biomedical Engineering at Rose-Hulman, is the former head of her department. As a dean, she has focused on several issues, including easier access for students with disabilities. Congratulations to Dr. Dee!
Also, several bioengineering and biomedical engineering departments across the country are celebrating birthdays. The departments at both the University of Virginia (biomedical engineering) and the University of Michigan (bioengineering) are 50 years old, with Michigan also celebrating the 20th birthday of their biomedical engineering department. The comparative baby of the group, the Department of Biomedical Engineering at Tulane University, turns 40. Happy birthday all!