This year, the lineup of new student orientation activities included a new event:  the first bioengineering retreat for incoming Ph.D. graduate students.  Sitting in the historic Mitchell Hall at the College of Physicians, the 2022 Ph.D. cohort participated in a fun and educational half-day program that included a series of bonding activities, small-group conversations, and panel discussions. Current members of the Graduate Association of Bioengineers (GABE) planned the program to strengthen personal connections among students and to lend some advice to the newcomers as they embarked on their scholastic journey.

Prior to the retreat, participants read The Immortal Life of Henrietta Lacks by Rebecca Skloot, a work that delves into the human story of Henrietta Lacks, a Black woman from Virginia whose cancer cells were obtained for scientific study in the early 1950s without her knowledge. Today, “HeLa” cells have become one of the most significant tools in cell biology, enabling the development of polio vaccines, research into radiation effects, and even research on COVID-19. Together at the retreat, we discussed the intersection of ethics and scientific discovery, and reflected on our responsibility as scientists to consider the impact of our work beyond the immediate scientific question.

Current Ph.D. students volunteered their afternoons to share in two additional activities. Aoife O’Farrell, David Mai, Lasya Sreepada, and Mosha Deng imparted sage advice about using on-campus resources, handling advisor-advisee conflicts, and finding the best bites in Philly in the “Surviving the Ph.D. 101” panel discussion. Seven other students presented a series of flash talks about their research areas and musings on the best hypothetical mascot to represent their lab. The afternoon finished with an after-hours visit to the Mütter Museum, which holds an extensive and unique collection of anatomical specimens and antique medical equipment previously used for medical education.

If the WhatsApp group formed by the new cohort during the event is any indication, the retreat was an overall success! GABE looks forward to continuing the event in the future.

Brittany H. Scheid is a Ph.D. candidate studying Bioengineering in the lab of Brian Litt, Professor in Bioengineering and Neurology, and she is Co-President of GABE at Penn.

Congratulations to recent Penn Bioengineering graduate Jason Andrechak on winning a Graduate Leadership Awards for 2022. Each year a select number of students across the university are recognized for their service and lasting contributions to graduate student life at Penn. Andrechak, one of only ten recipients in 2022, won a Dr. Andy Binns Award for Outstanding Service to Graduate and Professional Student Life. This award is presented to “graduate or professional students, upon their graduation from Penn, who have significantly impacted graduate and professional student life through service involvement in student life initiatives or organizations.” Andrechak won this award for his “service and leadership in advocating for equity and accessibility during the transition to virtual operations and following a period of leadership transition within the Graduate and Professional Student Assembly (GAPSA). ”

Andrechak completed his Ph.D. in Bioengineering in 2022, where he studied macrophage immunotherapy in solid tumors in the lab of Dennis E. Discher, Robert D. Bent Professor in Chemical and Biomolecular Engineering, Bioengineering, and Mechanical Engineering and Applied Mechanics. He was named a National Science Foundation Graduate Research Fellow in 2018. He has actively led the Graduate Association of Bioengineers (GABE) as Community Service & Outreach chair from 2017-2019 and as co-President from 2019-2022. He also served as the Director of Equity & Access for the Graduate & Professional Student Assembly (GAPSA) from 2020-2021, in addition to several other service and advisory roles at the department, school, and university levels.

Learn more about the Penn Graduate Leadership Awards and read the full list of recipients on the Grad Center at Penn website.

Thomas A.V. Cassel, Practice Professor in Mechanical Engineering and Applied Mechanics in the School of Engineering and Applied Science, recently sat down with Dayo Adetu (BSE 2019, MSE 2021), President of the Penn Graduate Association of Bioengineers (GABE), to give his insight into engineering entrepreneurship. Cassel is the Director of Penn’s Engineering Entrepreneurship Program, which he founded twenty one years ago. He joined Penn’s faculty in 1999 following a 20-year career of entrepreneurial business leadership.

Watch the video to hear about Cassel’s favorite Penn memories, the day-to-day experience of working at a startup, advice for venturing into entrepreneurship, and more.

Congratulations to recent Penn Bioengineering graduate Dayo Adetu, who was awarded a 2021 Graduate Leadership Award, one of only sixteen recipients across the university. Adetu is a recipient of the Dr. Andy Binns Award for Outstanding Service to Graduate and Professional Student Life. This award is presented to “graduate or professional students, upon their graduation from Penn, who have significantly impacted graduate and professional student life through service involvement in student life initiatives or organizations.” Adetu wins this award for her “service and leadership in advancing wellness and diversity initiatives across departments in the School of Engineering.”

Adetu graduated with a BSE in Bioengineering (BE) in 2019, concentrating in Biomedical Devices and minoring in Engineering Entrepreneurship, Math, and African Studies. She went on to pursue two Master’s degrees in BE and Mechanical Engineering and Applied Mechanics (MEAM) (concentration: Design and Manufacturing), graduating with both in 2021. She also received a certificate in Integrated Product Design. For the 2020-2021 academic year, she served as President of the Penn chapters of both the Graduate Association of Bioengineers (GABE) and the Mechanical Engineering Graduate Association (MEGA). She was the 2021 MEAM MSE Graduation student speaker and also received the Penn Engineering Graduate Award for Outstanding Service for both BE and MEAM Departments.

Learn more about the Penn Graduate Leadership Awards and read the full list of recipients on the Grad Center at Penn website.

Congratulations to recent Penn Bioengineering graduate Gabriel DeSantis on being awarded a Fulbright grant for the 2021-22 academic year:

‘As an avenue for building cross-cultural understanding, the U.S. Student Fulbright Program is an unparalleled opportunity for American students to represent our country and our University across the world,’ says Jane Morris, executive director of Penn’s Center for Undergraduate Research and Fellowships, which supports applicants. ‘We are so proud of all our Penn Fulbright students who will be contributing to this important mission through their study, research, and English teaching as Fulbrighters.’

Gabriel DeSantis, from Wellesley, Massachusetts, received his bachelor’s degree from Penn Bioengineering in 2020 and will graduate in May with a master’s degree in bioengineering from the School of Engineering and Applied Science. He was awarded a Fulbright to conduct research in Portugal at the International Iberian Nanotechnology Laboratory. There he will be creating a 3D bio-printed model to optimize the texture and nutritional profiles of cultivated meat. At Penn his academic interests included biology, food science, and sustainability, which he hopes to use to develop new systems of food production. On campus, DeSantis was a Penn Abroad Leader and board member of the Graduate Association of Bioengineers. He is a past chair of the Mask and Wig Club. He currently works as a research assistant for Allevi, a Philadelphia-based bioprinting company at Pennovation Works.”

Read the full list of Fulbright awardees in Penn Today.

Every spring, the Graduate Association of Bioengineers (GABE) at Penn partners up with iPraxis, an educational non-profit organization based in Philadelphia, to organize BETA Day, an event that brings together Bioengineering graduate students and local Philadelphia grade school students to introduce them to the field of bioengineering, the life of graduate students, and hands-on scientific demonstrations. Due to COVID-19 restrictions, we adapted the traditional in-person BETA Day into a virtual event on Zoom. This year, we assembled kits containing the necessary materials for our chosen demonstrations and worked with iPraxis to coordinate their delivery to partner schools and their students. This enabled students to perform their demonstrations in a hands-on manner from their own homes; over 40 students were able to participate in extracting their own DNA and making biomaterials with safe household materials.

The day began with a fantastic lecture by Michelle Johnson, Associate Professor in Bioengineering and Physical Medicine and Rehabilitation, who introduced students to the field of rehabilitation robotics and shared her experience as a scientist. Students then learned about DNA and biomaterials through lectures mediated by the graduate students Dayo Adetu and Puneeth Guruprasad. After each lecture, students broke into breakout rooms with graduate student facilitators where they were able to get some hands-on scientific experience as they extracted DNA from their cheek cells and fabricated alginate hydrogels. Michael Sobrepera, a graduate student in Dr. Johnson’s lab, concluded the event by giving a lecture on the process of robotics development and discussed where the field is heading and some important considerations for the field.

While yet another online event may seem unexciting, throughout the lectures students remained exceptionally engaged and raised fantastic questions ranging from the accessibility of low income communities to novel robotic therapeutic technologies to the bioethical questions robotic engineers will face as technologies advance. The impact of BETA day was evident as the high school students began to discuss the possible majors they would like to pursue for their bachelor’s degrees. Events like BETA Day give a glimpse into possible STEM fields and careers students can pursue. 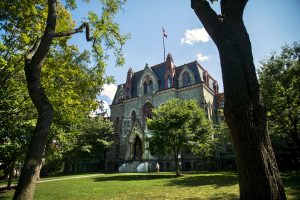 A recent piece in the Daily Pennsylvanian highlights Penn Bioengineering’s new Applicant-Support Program. Introduced for the Fall 2020 admissions cycle, this new program supports the department’s mission of increasing diversity, equity, and inclusion by pairing Ph.D. applicants to current doctoral students who will serve as a mentors to help navigate the process, give feedback on application materials, and provide other support to prospective students.

As Jason Andrechak, President of Penn’s Graduate Association of Association of Bioengineers (GABE) chapter, explains in the DP’s profile: “A lot of what a successful application looks like at this level is just knowing what a successful application looks like.” This and other new policies and programs implemented by GABE and Yale Cohen, Professor of Otorhinolaryngology, Neuroscience and Bioengineering and BE’s current Graduate Group Chair, seek to support applications from “underserved or underrepresented communities.”

Read the full story in the Daily Pennsylvanian.