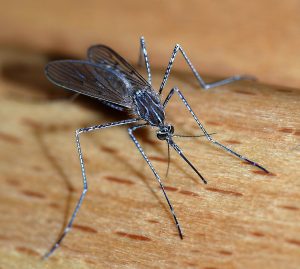 We’ve talked before at this site about the difficulty involved in implanting devices in the brain. One chief problem is that any implant to record brain signals causes small amounts of damage that causes signal quality to deteriorate over time. One approach to overcoming this problem uses flexible materials that can move with brain tissue movement, rather than resisting the movement to cause damage.
One of the more recent designs was inspired by an NPR report on mosquitoes. Dr. Andrew Shoffstall, a postdoc in the lab of Jeffrey Capadona, PhD, Associate Professor of Biomedical Engineering at Case Western Reserve University (CWRU), saw the report and used the mechanism that mosquitoes use when biting people to design a new device, which the CWRU team describes in an article in Scientific Reports.
The authors studied the buckling force when mosquitoes puncture the skin, using this design to invent new microneedles for brain implant recordings. The group fashioned a 3D-printed plastic device to mimic the process used by the mosquito. They tested the device, first mechanically and then in rat brains, finding that the device could successfully implant a microelectrode in 8 out of 8 trials. Certainly the device will require much more rigorous testing, but if successful, it could change the way implants are inserted into human patients.

Speaking of implants, they continue to decrease in size.  Scientists at Stanford University created a wireless device that is the size of a rice grain. Reporting in IEEE Transactions on Biomedical Circuits and Systems, the scientists, led by Amin Arbabian, PhD, Assistant Professor of Electrical Engineering at Stanford, and including Dr. Felicity Gore, a postdoc in the Department of Bioengineering, describe the design and fabrication of this implant. The implant was designed to stimulate peripheral nerves using either platinum electrodes connected directly to the nerve or light from a blue LED to stimulate optogenetic channels expressed in the neurons. The group conducted an in vivo experiment, using the device to stimulate the sciatic nerve of a frog, and they showed the device’s feasibility. Powered by ultrasound transmitted through the skin, the device has no external wire connections. The size of the implant, combined with its ability to target single nerves, could revolutionize how pain is treated, among other applications.

Meanwhile, here at Penn, the creation of very small things is getting a very big boost. In a new collaboration among schools and centers, the university’s Center for Targeted Therapeutics and Translational Nanomedicine has established the Chemical and Nanoparticle Synthesis Core (CNSC). The director, Andrew Tsourkas, PhD, is a Professor in the Department of Bioengineering and the Undergraduate Chair. The mission of the CNSC is to provide a concierge level service for Penn faculty interested in synthesizing new molecules for therapy development, as well as new nanoparticles for advanced diagnostics.

A Leap Forward With Stem Cells

Over the last decade, stem cell research has resulted in significant contributions to medical science. One application is the modeling of organs and organ systems for studies before in vivo investigations. However, stem cell projects involving the heart have been limited by the inability to get these cells to a mature state.
However, in a letter published in Nature, researchers at Columbia University and the University of Minho in Portugal describe how they used electrical and mechanical stimulation of human induced pluripotent stem cells to create more mature cells. The authors, led by Gordana Vunjak-Novakovic, PhD, University Professor and Mikati Foundation Professor of Biomedical Engineering and Medical Sciences at Columbia, describe how, after four weeks of culturing under the described conditions, the cells displayed multiple characteristics of maturity, although some electromechanical properties of mature cells remained lacking. These findings show that engineering the physical environment that surrounds cells during development is a key factor for the engineering design of replacement tissue.

Personalized medicine has begun to affect the way that doctors treat several diseases with genetic bases, notably cancer. However, first aid has lagged a bit behind in personalization, in part because the urgency of first aid care emphasizes fast, practical solutions that work for everyone. However, in a presentation at Philadelphia’s Franklin Institute last month, Jonathan Gerstenhaber, PhD, Assistant Professor of Instruction in the Department of Bioengineering at Temple University, demonstrated a prototype device that uses 3D printing technology to produce personalized bandages when they are needed.
Dr. Gersternhaber created a 3D printer that will print bandages directly onto the skin of the patient. Customizing the fit of the bandage with the printing technology would make them last longer, and the ‘on demand’ production of the bandage provides a chance to individualize the bandage design even in the urgent care setting. The device uses electrospinning technology to create bandages from soy protein, which, as a natural substance, can actually speed healing. Having completed the prototype, Dr. Gerstenhaber has moved onto portable models, as well as a larger device that can make bandages across a larger surface area.

Glaucoma is one of the earliest medical uses for cannabis, commonly known as marijuana. The cannabinoids in the cannabis plan have the effect of lowering intraocular pressure, which is the primary mechanism underlying glaucoma. However, the intoxicating effects of cannabis pose a problem for many patients. Thus, most patients still rely on eyedrops containing other drugs. Getting the dosage correct with eyedrops is tricky, however, because of the continual blinking and tearing of the eye.
Now, in a new article published in Drug Delivery and Translational Research, a team of researchers led by Vikramaditya G. Yadav, PhD, Assistant Professor of Chemical and Biological Engineering at the University of British Columbia, describes how they developed a nanoparticle hydrogel medication to deliver a cannabinoid. The authors tested the gel in situ, with good results. The authors imagine that such a gel could be used by patients at bedtime, and during the night, the drug would be dispensed by the gel and be gone by morning.