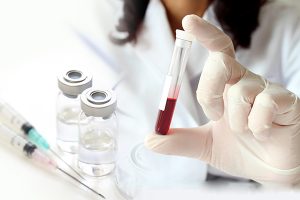 A blood test may be able to detect the most common form of pancreatic cancer while it is still in its early stages while also helping doctors accurately stage a patient’s disease and guide them to the appropriate treatment. A multidisciplinary study found the test—known as a liquid biopsy—was more accurate at detecting disease in a blinded study than any other known biomarker alone, and was also more accurate at staging disease than imaging is capable of alone. The team, which includes researchers from the Perelman School of Medicine, the Abramson Cancer Center, and the School of Engineering and Applied Science, published their findings in Clinical Cancer Research, a journal of the American Association for Cancer Research.

Pancreatic ductal adenocarcinoma (PDAC), the most common form of pancreatic cancer, is the third leading cause of cancer deaths. The overall five-year survival rate is just 9%, and most patients live less than one year following their diagnosis. One of the biggest challenges is catching the disease before it has progressed or spread. If the disease is caught early, patients may be candidates for surgery to remove the cancer, which can be curative. For locally advanced patients—meaning patients whose cancer has not spread beyond the pancreas but who are not candidates for surgery based on the size or location of the tumor—treatment involves three months of systemic therapy like chemo or radiation, then reassessing to see if surgery is an option. For patients whose disease has spread, there are currently no curative treatment options.

“Right now, the majority of patients who are diagnosed already have metastatic disease, so there is a critical need for a test that can not only detect the disease earlier but also accurately tell us who might be at a point where we can direct them to a potentially curative treatment,” says the study’s co-senior author Erica L. Carpenter, director of the Liquid Biopsy Laboratory and a research assistant professor of medicine. The study’s other co-senior author is David Issadore, an associate professor of bioengineering and electrical and systems engineering.