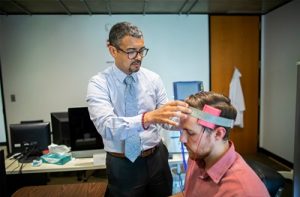 Penn Medicine has launched a new center to study the brain, one of the most complex systems in the body:

Among the key faculty involved in this new center is J. Peter Skirkanich Professor of Bioengineering Danielle Bassett. Bassett’s Complex Systems Lab studies biological, physical, and social systems by using and developing tools from network science and complex systems theory. Bassett, along with Assistant Professor of Psychiatry Desmond Oathes, will work to:

understand how TMS [i.e. transcranial magnetic stimulation] might improve working memory in healthy adults and those with ADHD by combining network control theory (a set of concepts and principles employed in engineering), magnetic stimulation of the brain, and functional brain imaging.

Jennifer Phillips-Cremins, Ph.D., was recently promoted to the tenured position of Associate Professor in Penn’s Department of Bioengineering. Cremins, leads a lab on campus in 3D Epigenomes and Systems Neurobiology.

In a recent piece profiling top technologies to watch in 2020, Cremins spoke to Nature about which technological trends she saw as being important for the year to come. In the panel, which highlighted perspectives from a panel of researchers across several fields, Cremins discussed the increasing relevance of innovations that would allow researchers to study the way that folding patterns within the human genome can influence how genes are expressed in  healthy individuals and misregulated in human disease.

One such innovation is actually employed by the Cremins Lab: light-activated dynamic looping (LADL). This technique uses both CRISPR/Cas9 and optogenetics to induce folding patterns into the genome on demand, using light as a trigger. In doing so, Cremins and her fellow researchers can more efficiently study the patterns of the human genome, and what effects certain folding patterns can have on the gene expression  state of the cell.

Now, with her new promotion, Cremins can continue advancing her research in understanding the genetic and epigenetic mechanisms that regulate neural connections during brain development, with a focus on how that understanding can eventually lead to better treatments of neurological disease. Beyond the lab, she’ll now lead a new Spatial Epigenetics program, bringing together scientists across Penn’s campus to understand how the spatial connections between biomolecules influence biological behavior. She will also continue teaching her hallmark course for Penn Bioengineering undergraduate students, Biological Data Science, and her more advanced graduate-level course in epigenomics. Congratulations, Dr. Cremins!

After nearly fifteen years of work, a new high-tech prosthetic arm from researchers at the University of Utah allows hand amputees to pluck grapes, pick up eggs without breaking them, and even put on their wedding rings. Named after Luke Skywalker’s robotic hand in the Star Wars saga, the LUKE Arm includes sensors that better mimic the way the human body sends information to the brain, allowing users to distinguish between soft and hard surfaces and to perform more complicated tasks. The arm relies heavily on an electrode array invented by University of Utah biomedical engineering professor Richard A. Normann, Ph.D., which is a bundle of microelectrodes that enable a computer to read signals from connected nerves in the user’s forearm.

But the biggest innovation in the use of these electrode arrays for the LUKE Arm is in the way they allow the prosthetic to mimic the sense of feeling on the surface of an object that indicates how much pressure should be applied when handling it. Gregory Clark, Ph.D., an associate professor of biomedical engineering at the University of Utah and the leader of the LUKE Arm project, says the key to improving these functions in the prosthetic was by more closely mimicking the path that this information takes to the brain, as opposed to merely what comprises that sensory information. In the future, Clark hopes to improve upon the LUKE Arm by including more inputs, like one for temperature data, and on making them more portable by eliminating the device’s need for computer connection.

While technological advancements over the past few decades have opened doors to understanding the topological structures of DNA, we still have far more to learn about how these structures impact and contribute to genome function. But here at Penn, the Cremins Laboratory in 3D Epigenomes and Systems Neurobiology hopes to fix that. Led by Jennifer E. Phillips-Cremins, Ph.D., members of the lab use light-activated dynamic looping (LADL) to better understand the way that genome topological properties and folding can affect protein translation. Cremins and her lab use this technique to force specific genome folds to interact with each other, and create temporary DNA loops that can then be bound together in the presence of blue light for certain proteins in the Arabidopsis plant. Using the data from these tests, researchers can better understand the genome structure-function relationships, and hopefully open the door to new treatments for diseases in which expression or mis-expression of certain genes is the cause.

Artificial Cells Can Deliver Molecules Better than the Real Thing

From pills to vaccines, ways to deliver drugs into the body have been constantly evolving since the early days of medicine.

Now, a new study from an interdisciplinary team led by researchers at the University of Pennsylvania provides a new platform for how drugs could be delivered to their targets in the future. Their work was published in the Proceedings of the National Academy of Sciences.

The research focuses on a dendrimersome, a compartment with a lamellar structure and size that mimic a living cell. It can be thought of as the shipping box of the cellular world that carries an assortment of molecules as cargo.

The scientists found that these dendrimersomes, which have a multilayered, onion-like structure, were able to “carry” high concentrations of molecules that don’t like water, which is common in pharmaceutical drugs. They were also able to carry these molecules more efficiently than other commercially available vessels. Additionally, the building block of the cell-like compartment, a janus dendrimer, is classified as an amphiphile, meaning it contains molecules that don’t like water and also molecules that are soluble in water, like lipids, that make up natural membranes.

“This is a different amphiphile that makes really cool self-assembled onions into which we were able to load a bunch of molecular cargos,” says co-author Matthew Good.

Read the rest of the story on Penn Today.

In a recent review of over 5,000 sleep studies, biomedical engineering researchers at the University of Texas at Austin found a connection between water-based passive body heating and sleep onset latency, efficiency, and quality. Using meta-analytical tools to compare all of the studies and patient data, lead author and Ph.D. candidate Shahab Haghayegh and his team found that a warm bath in the temperature range of 104-109 degrees Fahrenheit taken 1-2 hours before bed has the ability to improve all three considered sleep categories. This makes sense considering that our body’s Circadian rhythms govern both our sleep cycles and temperature, bringing us to a higher temperature during the day and a lower one at night during sleep. In fact, this lowering of body temperature before sleep is what helps to trigger the onset of sleep, so taking a warm bath and allowing your body to cool down from it before going to sleep enhances the body’s own efforts of naturally cooling down before we go to bed. With this new and comprehensive review, those who suffer from poor sleep quality may soon find solace in temperature regulation therapy systems.

With the recent 50th anniversary of the first moon landing by Americans Neil Armstrong, Buzz Aldrin, and Michael Collins in 1969, ABC News looked back at one of the women involved in the project. Judy Sullivan was a biomedical engineer at the time of the project, and served as the lead engineer of the biomedical system for Apollo 11. In this role, she led studies on the astronauts’ breathing rates and sensor capabilities for the devices being sent into space to help the astronauts monitor their health. For the Apollo 11 mission and a lot of Sullivan’s early work at NASA, she worked on teams of all men, as women were often encouraged to become teachers, secretaries, or homemakers over other professions. Today, Sullivan says she’s thrilled that women have more career options to choose from, and wants to continue seeing more women getting involved in math and science.

We would like to congratulate Sanjay Kumar, M.D., Ph.D., on his appointment as the new Department Chair of Bioengineering at the University of California, Berkeley. Since joining the faculty in 2005, Kumar has received several prestigious awards including the NSF Career Award, the NIH Director’s New Innovator Award, the Presidential Early Career Award for Scientists and Engineers, and the Berkeley student-voted Outstanding Teacher Award.