Cells in complex organisms undergo frequent changes, and researchers have struggled to monitor these changes and create a comprehensive profile for living cells and tissues. Historically researchers have been limited to only 3-5 markers due to spectral overlaps in fluorescence microscopy, an essential tool required for imaging cells. With only this small handful of markers, it is difficult to monitor protein expressions of live cells and a comprehensive profile of cellular dynamics cannot be created. However, a new study in Nature Biotechnology addresses these limitations by demonstrating a new method for comprehensive profiling of living cells.

Jina Ko, Assistant Professor in Bioengineering in the School of Engineering and Applied Science and in Pathology and Laboratory Medicine in the Perelman School of Medicine, served as lead author of this new study. Ko conducted postdoctoral research at Massachusetts General Hospital (MGH) and the Wyss Institute at Harvard University, and the work for this study was done in collaboration with Jonathan Carlson M.D., Ph.D. and Ralph Weissleder M.D., Ph.D. of MGH. Ko’s lab at Penn develops novel technologies using bioengineering, molecular biology, and chemistry to address diagnostic challenges for precision medicine.

To address these limitations in microscopy, Ko’s team developed a new chemistry tool which was highly gentle to cells. This “scission-accelerated fluorophore exchange (or SAFE)” method utilizes “click” chemistry, a type of chemistry that follows examples found in nature to create fast and simple reactions. This new SAFE method enabled Ko to achieve non-toxic conditions to living cells and tissues, whereas previous methods have used harsh chemicals that would strip off fluorophores and consequently would not work with living cells and tissues.

With the development of SAFE, the authors demonstrated that researchers can now effectively perform multiple cycles of cell profiling and can monitor cellular changes over the course of their observations. Instead of the previous limitation of 3-5 markers total, SAFE allows for many more cycles and can keep track of almost as many markers as the researcher wants. One can now stain cells and quench/release fluorophores and repeat the cycle multiple times for multiplexing on living cells. Each cycle can profile 3 markers, and so someone interested in profiling 15 markers could easily perform 5 cycles to achieve this much more comprehensive cell profile. With this breakthrough in more detailed imaging of cells, SAFE demonstrates broad applicability for allowing researchers to better investigate the physiologic dynamics in living systems.

This study was supported by the Schmidt Science Fellows in Partnership with the Rhodes Trust and National Institutes of Health, National Cancer Institute (K99CA256353).

To Bee or Not To Bee 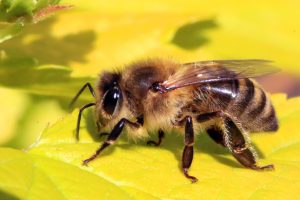 You might have heard reporting over the last few years that honeybees are dying at faster-than-usual rates. Over the last decade, colony collapse rates increased significantly, causing precipitous losses in the overall bee population. The consequences could be grave: in addition to providing honey, bee pollination is an important factor in agriculture, affecting major crops such as melons. squashes, and several kinds of nuts. Loss of this factor could substantially increase prices or even result in shortages.
To address this crisis, scientists at Washington State University focused on the role played by pesticides in colony collapse disorder. These poisons are particularly toxic to bees in tiny amounts, with the problem compounded by the ability of these toxins to build up in the bees’ bodies. A group of students led by Waled Suliman, PhD, a postdoctoral research associate in WSU’s Department of Biological Systems Engineering, developed a powder that acts like a magnet to draw pesticide out of the insects’ bodies. The bees then excrete the pesticide-laden particles like any other kind of waste.
The initiative, called Gaminus, has already tested its material in bees and found that the design works as planned. In coming months, they intend to continue their research by measuring toxin levels in the excreted particles.

An important field within bioengineering is visualization, or the ability to use technology to enable scientists to see biological processes not normally visible to the naked eye. If you’ve seen a fetal ultrasound, for instance, then you’ve seen how one part of this area has advanced enormously in recent years. However, integrating visualization technologies with surgery remains a major challenge, particularly for minimally invasive surgeries. One key obstacle is that surgeons must rely on video screens during surgery, rather than being able to look down and feel the tissue with their hands.
A startup at the Cleveland Clinic is attempting to integrate perioperative visualization with HoloLens, a brand of smart glasses developed by Microsoft, to produce “mixed reality,” i.e., a combination of actual vision and virtual reality. With a grant from the National Heart, Lung, and Blood Institute awarded to Centerline Biomedical, the Cleveland Clinic startup, and to Karl West, Director of Medical Device Solutions at Cleveland Clinic and a staff member in the Lerner Research Institute’s Department of Biomedical Engineering, the integrated visualization device will be tested in a preclinical model of cardiac stent placement.
Elsewhere in the Midwest, Nathan Gianneschi, PhD, Professor of Chemistry, Biomedical Engineering and Materials Science and Engineering at Northwestern University, has been leading an effort to augment transmission electron microscopy (TEM). In its common form, TEM provides highly detailed images of submicroscopic organisms and structures and can provide visualization of nanomaterials as they grow. Gianneschi’s new approach, called liquid cell TEM (LCTEM), uses an irradiated region of a liquid cell to facilitate real-time visualization. The work is detailed in a recent article in ACS Central Science. You can see video posted online at the journal website.

Ultraviolet and infrared light appear beyond either end of the visible light spectrum. Past work using either ultraviolet or infrared light to activate fluorescent proteins can help visualize biochemistry in vivo, but it can also damage cells because of the activating light or the chemicals produced by illuminating the proteins. Recently, Young L. Kim, PhD,  Associate Professor of Biomedical Engineering at Purdue, led a team of scientists who produced red fluorescent silk to kill harmful bacteria when the protein is activated by external green light. Dr. Kim and his colleagues report their findings in Advanced Science. The silk requires further testing, but if ultimately proved successful, it could overcome a current limitation of the use light-activated fluorescent biomaterials in controlling pathogens, which is that the light itself, often in the ultraviolet part of the spectrum, comes with its own potentially negative effects on health.

Vascular stents to reopen blocked coronary arteries are usually the treatments used for patients with mild coronary artery disease. These simple devices are a small tube, sometimes coated with a drug to prevent clotting, inserted into the artery to restore flow. Stents can fail over time, requiring reimplantation, and the stents may also narrow over time and reduce blood flow to the surrounding tissue. To overcome this problem, Donghui Zhu, PhD, Associate Professor in the Department of Biomedical Engineering at the University of North Texas, developed a stent that is fully biodegradable and disappears over time as the damaged tissue heals. Dr. Zhu recently won a $2 million grant from the National Institutes of Health to test the stent in a series of trials.

Penn State University has won a research grant from the American Heart Association, which will be used to support its 10-week Penn State Summer Translational Cardiovascular Science Institute (STCSI). Led by Keefe Manning, PhD, Professor of Biomedical Engineering at Penn State, the STCSI will provide $4,000 stipends for undergraduate students to conduct summer research on cardiovascular disease.
Finally, here at Penn Bioengineering, we are immensely proud to announce that our PhD student Jina Ko was named one of 14 PhD candidates in the inaugural class of Schmidt Science Fellows. Schmidt Fellows are each awarded a $100,000 stipend to cover the cost of living while conducting postdoctoral research. Congratulations, Jina!

Jina Ko, a PhD student in the Department of Bioengineering at the University of Pennsylvania, was among the 14 PhD candidates from the U.S., Canada, and Germany to be named to the inaugural class of Schmidt Science Fellows. The announcement was made on April 23 at the Apella Alexandria Center for Life Science in New York. Jina will receive a $100,000 to cover living expenses while working as a postdoctoral fellow under the auspices of the Rhodes Trust, which also administers the Rhodes Scholarships for student-athletes. The placement is preceded by a five-week orientation at the University of Oxford beginning this July.

An alumna of Rice University in Houston, Jina came to Penn in 2013 and has worked in the lab of Professor David Issadore, working on microfluidics and lab-on-a-chip technologies. “Jina is the ideal person for the Schmidt Fellowship,” Dr. Issadore said, “and I am very pleased that Eric and Wendy Schmidt agreed! Her work in my lab has brought together microfluidics with machine learning to develop diagnostics for diseases that do not have conventional biomarkers. By working with collaborators at Abramson Cancer Center and Presbyterian hospital, Jina demonstrated an ability to accurately diagnose pancreatic cancer at its earliest stages and prognose specific states of traumatic brain injury, both of which were not possible with previous technology. This fellowship will allow Jina to take a much deeper dive into machine learning and its application to next generation medical diagnostics during her post-doc, and I can’t wait to see what she develops.”

Pancreatic cancer remains one of the deadliest types of cancer, with one- and five-year survival rates of only 20% and 7%, respectively, according to the American Cancer Society. The mortality is so high because the disease does not typically cause symptoms until it is too late. Therefore, earlier detection could be the key to better survival rates.

In a new paper published by Lab on a Chip, a research team from the lab of David Issadore, assistant professor of Bioengineering, reports on its development of a micropore chip, callled the circulating tumor cell fluorescence in situ hybridization (CaTCh FISH) chip, that could detect circulating tumor cells (CTCs) from mice and patients with pancreatic cancer, even at very low, previously undetectable levels.

Jin A (Jina) Ko, who is a Ph.D. student in Bioengineering and first author on the paper, says that CTCs are a key mechanism underlying metastasis, which is another reason why pancreatic cancer has such a low survival rate. Not only can the chip that she helped design detect these cells, which circulate in the bloodstream, but more importantly, pancreatic tumors shed these cells even in their very early stages before any spread has occurred. Therefore, provided the test is performed early enough, the tumor can be detected and treated. Patients with family histories of pancreatic cancer or who have tested positive for certain gene mutations would likely benefit from this sort of test.

The study authors also tested the CaTCh FISH chip using blood samples from 14 patients with advanced pancreatic cancer and from healthy controls. They found that their micropore chip could detect several RNA markers of cancer in 10-mL samples — around 2 tsp. In addition, there were no false-negative results among the healthy controls, demonstrating a high level of reliability in that regard.