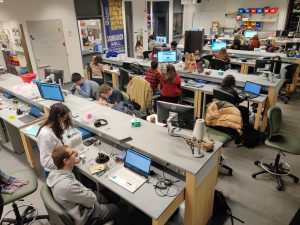 The George H. Stephenson Foundation Educational Laboratory and Bio-MakerSpace, more commonly known as the Bio-MakerSpace, has recently become a hub for Penn student start-ups that continue after graduation. Beyond offering a home base for projects by Bioengineering majors, the lab is also open to Penn students, regardless of major. Unlike other departmental undergraduate labs, the Bio-MakerSpace encourages interdisciplinary projects and collaborations from students across  all different majors.

Even better, the lab has a neutral policy when it comes to intellectual property (IP), meaning all IP behind student projects belongs to the students instead of the lab or the engineering school. With a wide variety of prototyping equipment, coding and software programs installed on lab computers, and an extremely helpful lab staff, the Bio-MakerSpace provides students of all academic backgrounds the resources to turn their ideas into realities or even businesses, as a recent succession of start-ups founded in the lab has shown.

One of the most successful start-ups to come out of the Bio-MakerSpace in the last few years is Group K Diagnostics, founded by 2017 Bioengineering alumna Brianna Wronko. The company focuses on the use of a point-of-care diagnostic device called KromaHealthTM. Offering a variety of different tests based on the input of a small amount of blood, serum, or urine, the device induces a color change through a series of reactions that can be detected through image processing. Developed in part from Wronko’s senior design project (hence the name “Group K”) and in part from her experience working at an HIV clinic, Group K Diagnostics looks to expand access to care for all populations.

But not all start-ups from the Bio-MakerSpace have origins in senior design projects. Three start-ups from 2019, two of which won the Penn President’s Innovation Prize, all began as independent initiatives from students. InstaHub, founded by 2019 Wharton alumnus Michael Wong with help from Bioengineering doctoral candidate Dayo Adewole, is a company that focuses on the use of snap-on automation for light energy conservation. A simple and easy-to-install device with motion and occupancy sensors, InstaHub aims to reduce energy consumption in a way that’s simpler and cheaper than rewiring projects that might otherwise be required. Here, Adewole shares the way that access to the Bio-MakerSpace provided InstaHub with a helpful platform.

The second start-up from 2019 to come out of the Bio-MakerSpace and win a President’s Innovation Prize is Strella Biotechnology, founded by recent graduate Katherine Sizov (Biology 2019). In developing sensors with the ability to detect ethylene gas emitted by rotting fruits, Strella hopes to reduce the immense amount of food waste due to produce simply going bad in storage. With a patent-pending biosensor that mimics the way ripe fruits detect ethylene emissions of nearby rotting fruits, the technology behind Strella involves both biology and aspects of engineering. In this video, Sizov herself talks about the way that the Bio-MakerSpace opened its doors to her, and allowed her work to really take off with the help of resources she wouldn’t have easily found otherwise.

Yet another start-up to use the Bio-MakerSpace as a launch pad for innovation is BioAlert Technologies, comprised of a group of Penn engineering undergraduate and graduate students, including 2019 Bioengineering alumnus Johnny Forde and current Biotechnology student Marc Rosenberg, who is the startup’s CEO and founder. BioAlert’s innovations are in what they call continuous infection monitoring (CIM) systems, designed to detect infections in patients with diabetic foot ulcers. Often, even when properly bandaged by a doctor, these ulcers run the risk of bacterial infection once a patient returns home and continues to care for the wound. BioAlert uses their platform to assess whether or not a bacterial infection might occur in a given patient’s wound, and uses an app to alert both patients and doctors of it, so that patients can receive the proper response treatment and medication as quickly as possible.

Though each of these start-ups used the resources of the Bio-MakerSpace, they are each interdisciplinary approaches to solving real-world problems today. Paired with other student resources at Penn like courses offered under an Engineering Entrepreneurship minor, knowledge from the nearby Wharton business school professors, and competitions like the Rothberg Catalyzer, the Bio-MakerSpace allows for any student to transform their idea into a reality, and potentially take it to market.

A New Microscopy Technique Could Reduce the Risk of LASIK Surgery 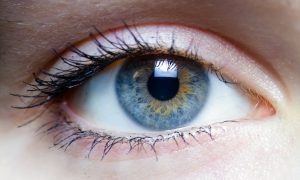 Though over ten million Americans have undergone LASIK vision corrective surgery since the option became available about 20 years ago, the procedure still poses some risk to patients. In addition to the usual risks of any surgery however, LASIK has even more due to the lack of a precise way to measure the refractive properties of the eye, which forces surgeons to make approximations in their measurements during the procedure. In an effort to eliminate this risk, a University of Maryland team of researchers in the Optics Biotech Laboratory led by Giuliano Scarcelli, Ph. D., designed a microscopy technique that would allow for precise measurements of these properties.

Using a form of light-scattering technology called Brillouin spectroscopy, Scarcelli and his lab found a way to directly determine a patient’s refractive index – the quantity surgeons need to know to be able to measure and adjust the way light travels through the eye. Often used as a way to sense mechanical properties of tissues and cells, this technology holds promise for taking three-dimensional spatial observations of these structures around the eye. Scarcelli hopes to keep improving the resolution of the new technique, to further understanding of the eye, and reduce even more of the risks involved with LASIK surgery.

Space flight is likely to cause deleterious changes to the composition of bacterial flora, leading to an increased risk of infection. The environment may also affect the susceptibility of microorganisms within the spacecraft to antibiotics, key components of flown medical kits, and may modify the virulence of bacteria and other microorganisms that contaminate the fabric of the International Space Station and other flight platforms.

“It has been known since the early days of human space flight that astronauts are more prone to infection,” says Dongeun (Dan) Huh, Wilf Family Term Assistant Professor in Bioengineering at Penn Engineering. “Infections can potentially be a serious threat to astronauts, but we don’t have a good fundamental understanding of how the microgravity environment changes the way our immune system reacts to pathogens.”

In collaboration with G. Scott Worthen, a physician-scientist in neonatology at the Children’s Hospital of Philadelphia, Huh will attempt to answer this question by sending tissues-on-chips to space. Last June, the Center for the Advancement of Science in Space (CASIS) and the National Center for Advancing Translational Sciences (NCATS), part of the National Institutes of Health (NIH), announced that the duo had received funding to study lung host defense in microgravity at the International Space Station.

Huh and Worthen aim to model respiratory infection, which accounts for more than 30 percent of all infections reported in astronauts. The project’s goals are to test engineered systems that model the airway and bone marrow, a critical organ in the immune system responsible for generating white blood cells, and to combine the models to emulate and understand the integrated immune responses of the human respiratory system in microgravity.

At the Westbrook Technology Center of Sappi, a global pulp and paper company, researchers found ways to apply innovations in paper texture for medical use. So far, these include endeavors in medical test devices and patches for patient diagnostics. In collaboration with the Caitlin Howell, Ph.D., Assistant Professor of Chemical and Biomedical Engineering at the University of Maine, Sappi hopes to continue advances in these unconventional uses of their paper, especially as the business in paper for publishing purposes declines.

Sappi’s projects with the university focus on the development of paper microfluidics devices as what’s now becoming a widespread solution for obstacles in point-of-care diagnostics. One project in particular, called Sharklet, uses a paper that mimics shark skin as a way to impede unwanted microbial growth on the device – a key characteristic needed for its transition into commercial use. Beyond this example, Sappi’s work in developing paper microfluidics underscores the benefits of these devices in their mass producibility and adaptability.

Scientists at Rice University recently found that a protein signaling pathway called WNT, typically associated with its role in early organism development, can both listen for signals from a large amount of triggers and influence cell types throughout embryonic development. These new findings, published in PNAS, add to the already known functions of WNT, deepening our understanding of it and opening the doors to new potential applications of it in stem cell research.

Led by Aryeh Warmflash, Ph. D., researchers discovered that the WNT pathway is different between stem cells and differentiated cells, contrary to prior belief that it was the same for both. Using CRISPR-Cas9 gene editing technology, the Warmflash lab observed that the WNT signaling pathway is actually context-dependent throughout the process of cellular development. This research brings a whole new understanding to the way the WNT pathway operates, and could open the doors to new forms of gene therapy and treatments for diseases like cancers that involve genetic pathway mutations.

In a recent article from Technical.ly Philly, named Group K Diagnostics on a list of ten promising startups in Philadelphia. Group K Diagnostics founder Brianna Wronko graduated with a B.S.E. from Penn’s Department of Bioengineering in 2017, and her point-of-care diagnostics company raised over $2 million in funding last year. Congratulations Brianna!

We would also like to congratulate Pamela K. Woodward, M.D., on her being named as the inaugural Hugh Monroe Wilson Professor of Radiology at the Washington University School of Medicine in St. Louis. Also a Professor of Biomedical Engineering at the university, Dr. Woodward leads a research lab with a focus on cardiovascular imaging, including work on new standards for diagnosis of pulmonary blood clots and on an atherosclerosis imaging agent.

Lastly, we would like to congratulate all of the following researchers on their election to the National Academy of Engineering: